skip to main | skip to sidebar

Trawling For Clues In The Sea Of Life 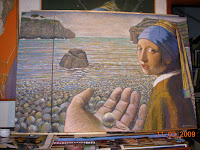 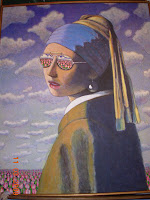 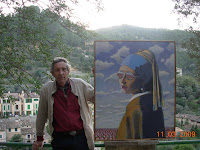 I recently spoke to my friend, Arturo Rhodes, who is a painter in Deia. Arturo is originally British but like many of his co-patriots, he came to Mallorca many years ago and never left. Captured by this beautiful land, its scenery, it’s ambiance and the tranquility of this village, he has made an art form out of living a good life by the sea in the little village of Deia. He las lived in Deia for about 30 years.

Arturo lives in a cool two story house perched up on a terrace above the Clot, which is a neighborhood in the village of Deia. Although he has a car he walks to many places in town. From where he parks his car, Arturo has to walk on a dirt footpath that winds around and later goes up about 3 sets of stairs before he reaches his house. He tells me that’s how he stays in good shape. Like most houses in Mallorca, his house is made out of stone. It has large picture windows bringing in lots of natural light, and it faces east with views also to the north and south. He has his studio up on the right hand side of the second story of the house.

Arturo and I spoke about where he gets inspiration for his paintings. I was sure he was going to say nature, the ocean, his imagination or characters he has met. He surprised me when he said he constantly looks for “clues.” He looks for “clues” in things he observes, conversations, dreams, images. You could say he is always trawling for clues in the sea of life. He sees a broken glass, a ball thrown into the street by a child, a red scarf, and then he sees a word written on a sign and puts all of this together into a package to create a painting. What a way to paint! Arturo is known as being a surrealist painter from the same style as say a Magritte or a Salvador Dali. His paintings often put together a known, familiar object with the unknown or unknowable. Or, he takes common images and puts them out of place from the norm, from where you would expect to see them. You could say Arturo's paintings challenge you to see life in a different way.

An American in Deia, Mallorca

Liliana Correa
"And, when you want something, all the universe conspires to help you achieve it. It's called the principle of favorability, beginner's luck. Because life wants you to achieve your destiny." Paulo Coelho